Starting at a new school can be scary for anyone, but it can be especially scary when starting a school as unique as Carver Center. As a senior, I understand how important it is to get acclimated to the Carver Center atmosphere, so I’ve compiled a guide for your next four years at Carver.

Hey, can you help me find the…

Boasting 228,000 square feet, navigating the Carver Center building is one of the most important challenges to tackle as a freshman. I got lost last week trying my Wildcat Time activity — and I’ve been attending Carver for the last four years. Due to the new COVID-19 regulations, all students enter the building through the doors specified for their grade level this year (freshmen and juniors in the auditorium, and sophomores and seniors in the gym). In the past, all students would enter through the cafeteria and be released to roam all three floors, play music in the halls, or go to coach class until 7:40 when the bell rang that signified the looming start of class. Sadly, you have lost some of your ability to explore the school, but that does not mean you can’t familiarize yourself with these halls.

Obviously, the cafeteria and gym occupy opposite ends of the school. Directly outside of the cafeteria is Carver Café which doubles as both a classroom and a restaurant where seniors in the Culinary Arts prime host themed cafes once a month. The two hallways stemming from the cafeteria hold numerous Visual Arts classrooms and the one directly adjacent to the Carver Cafe leads to the Culinary Arts kitchen as well. If you continue straight ahead from the cafeteria you will pass an assortment of artwork from current Visual students that are rotated regularly throughout the year. The artwork seen elsewhere in the school belongs to past students.

Best understood as Carver Center’s steady-beating heart, the Commons is the atmospheric and communal core of the school. It is the place where all students get to congregate in loud, vivid fashion. It’s typically the space for any major event: the Homecoming dance, Halloween photo-ops, Carver Celebration, Renaissance Fest, promposals, Culture Fest, etc. In it you will find the grand staircase (tucked in the corner is a smaller, more average, and way less cool-looking stairwell as well),  a piano, as well regular displays of work from Visual, Carpentry, and Cosmetology students. It functions as everything from a gathering hall to a classroom to a bulletin board for announcements. The commons are also home to the Front Office— where you can go whenever you have any confusion or questions about pretty much anything —and the Art  Gallery where alumni art installments are shown briefly throughout the school year.

The hallway to the right of the staircase houses the classrooms for the Acting, Design, and Production, and Carpentry primes. If you follow that hallway to the end and make another left turn, you will be greeted with the pristine glass walls of the Dance studios. The short Dance hallway connects to the one on the left side of the grand staircase which houses an assortment of musical suites for the Digital Instrument Music prime (also known as DIM). Directly to the left of the commons sits Cosmetology, occupying the entire corner at the entrance of the gym wing of the school.

with everything,  Learner’s Permits to class schedules, emotional support, and college application help. Just a little further down on the same side of the hallway is the Nurse’s office and just one door down, the school Social Worker’s office — another place you can lean on for school and emotional support. The rest of the wing is occupied by academic classrooms and the gym with its adjacent resource, weight, and locker rooms. 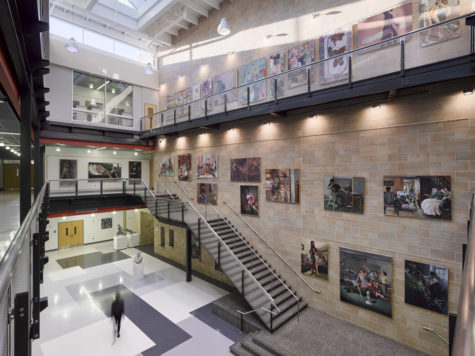 Now that you know your way around the first floor, there are only a few more key things to know about the other two floors. First, right above the cafeteria are the Literary and IT Prime classrooms. Directly at the top of the grand staircase, the Library Media Center sits enclosed in bright glass windows. The library is open during lunches, and you can even stay there for Wildcat Time.

The third floor is home to all of Carver Center’s science labs and the Seminar Lounge. Illuminated by gleaming sunshine, it has an abundance of comfy chairs to sunbathe in and two flatscreens that I, in my four years at Carver, have never seen be used for anything other than wall art.

Getting into the Carver Culture

We have several big events here at Carver each year. Here is a quick rundown of what to look forward to this school year. All dates are subject to change or cancellation.

The homecoming dance traditionally takes place on the second Saturday of October. The week before is known as Spirit Week and there are all types of themed dress-up days you can participate in. Friday is typically reserved for the Pep Rally in which most, if not all, of Carver’s clubs and sports teams, will showcase their talents.

(All homecoming dances and indoor pep rallies have been canceled this school year in light of the ongoing pandemic.)

On the last day of school before Thanksgiving Day, the Culture Club hosts the Culture Fest in the Commons where students get to share and learn about their fellow students’ cultures. You have the opportunity to participate in anything from traditional dances, watch live performances, tasting cultural dishes, and trivia games. This festival takes place during the school day and every student will have time to visit automatically accounted for in their class schedule.

The Trap Door Theatre Company is an entirely student-run ensemble that produces two shows each year. The first will be William Shakespeare’s Julius Caesar and it will take place later this year on December 17-18. Their second production will be The Wolves by Sarah DeLappe on May 12th and 13th of next year. The Trap Door Theatre Company normally hosts their performances in the Black Box Theater and additional information about their shows will be announced as the year goes on.

Hosted by Carver Center’s Black Awareness Club, the Fashion show is more than just a showcase of style. It is a thorough production packed full of choreography, synchronization, music, and passion. All students have the chance to audition for the Fashion Show, but the amount of preparation it takes for one to be a part of it translates to a requirement for serious commitment. Auditions take place in early October. Fashion Show is a highly anticipated event, so be sure to snatch up tickets as soon as they are available because they sell out quickly!

Carver Celebration is an event hosted by the Carver Center Foundation to raise money for the school. All the primes and even some clubs work together to provide everything from food to live performances for those who pay to attend. Information about this event will be announced throughout the year and is typically distributed through the Mosaic newsletter.

On the last day of school before Spring Break, Carver hosts its own version of a Renaissance Fest. Similar to Culture Fest, it is an in-school event that all students are able to participate in. Not only does the festival encompass the usual European Renaissance, but it also includes more modern turning points in history, like the Harlem Renaissance. There will be activities accompanied by live music in the Commons and its adjacent hallways for students to participate in.

The Dance and D.I.M. primes each host their own concerts and performances throughout the school year. Seniors in both primes have showcase performances where they exhibit their dance or musical talent. These shows are usually promoted via the morning announcements, so keep an ear out for upcoming performances.

Due to the ongoing pandemic, Carver Café will operate slightly differently this school year. It will still take place for two months once a month with a different theme each time. The first will take place on October 19th and 20th and is centered around Thai-Italian fusion. As far as the new COVID-19 precautions, there will not be an in-person Café this year; pick-up and in-school delivery are the only two options this year. Pick-ups are for outside customers while in-school delivery is an option for teachers and students. If you know someone who wishes to order from outside of the school, please be sure that contactless front door pick-up will take place on the Kenilworth side of the parking lot and masks are required. Orders will come pre-packaged in takeout trays with utensils. All orders will be conducted online. To register and participate, complete these steps 1-2 weeks in advance:

Scan the QR codes posted around the school.
Select your mode of reception (in-school delivery or pick-up)
Select the items you wish to order.
And violà! Your food will be delivered on one of the two scheduled dates!

If you would like to be on a Carver Café mailing list to receive menus and details for future Cafés, you can find the link to do so on the Carver Center Catalyst website (carvercentercatalyst.com).

At the end of the day, Carver Center is more than just a building. It is a beautiful community bubbling with creativity, art, and support. Though overwhelming and confusing at first, it is the perfect place to make yourself at home.