A Feminism for Black Women 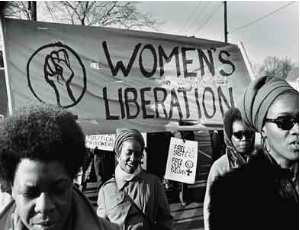 Feminism, as defined by the Oxford Dictionary, is “the advocacy of women’s rights on the basis of equality of the sexes”. Many early notable feminists did not advocate for all women, Susan B. Anthony even saying that she would rather “cut off this right arm of mine before I ever work or demand the ballot for the Negro and not the woman.” Historically, feminist movements have been pro-white, effectively ignoring the needs of black women and other women of color. It wasn’t until 1989 that the word intersectionality was coined by Kimberlé Crenshaw. Intersectionality is a framework within feminism that analyzes “how various forms of inequality often operate together and exacerbate each other”. In a February 2020 interview with Time Magazine, Crenshaw emphasizes the importance of thinking of axes of oppression as working in conjunction to oppress.

But many women of color are still wary of feminism because they feel it doesn’t fight for them. USA Today reported that most Americans believe that feminism has helped white women more. Womanism, proposed by Alice Walker, is a similar ideology to feminism, except centering around those disillusioned women of color, specifically, black women. In her book, In Search of Our Mothers’ Gardens: Womanist Prose, Walker writes, “womanist is to feminist as purple is to lavender”. Womanism and feminism have similar goals, liberating women from male oppression, but womanism’s emphasis on liberating women of color distinguishes it from traditional feminism.

A womanist is a “black feminist or feminist of color…[that] loves herself. Regardless.” Womanism places a special emphasis on women’s strength, culture, and emotional balance. According to Walker’s definition, a womanist “appreciates and prefers women’s culture”. Many feminist scholars have highlighted the nearly identical nature of womanism and black feminism, and the terms are often used interchangeably.

In 1851, Sojourner Truth delivered her famous speech, Ain’t I A Woman? to the Akron Women’s Convention. In it, Truth expressed her concerns with the feminist movement. Specifically, she found issues with feminists equating women’s oppression with white women’s oppression. Born into slavery, Sojourner Truth had “ploughed and planted, and gathered into barns”, which most white women at the convention had never done. White women were infantilized by misogyny, while black women were still expected to do what was considered men’s work. Feminist scholar Angela Davis writes, “when it was profitable to exploit them [black female slaves] as men, they were regarded, in effect, as genderless,” in her book, Women, Race, and Class. Centering women’s liberation around white women’s struggles was ignoring the needs of black women and other women of color.

Black feminism in general also has a great deal of contemporary relevance. The #MeToo movement was founded by Tanya Burke in 2006, who wanted to raise awareness for the sexual harassment and abuse of women everywhere. White actress Alyssa Milano tweeted the phrase “MeToo” in 2017, which caused the campaign to gain traction. Since then, #MeToo has been used tens of millions of times. The #MeToo movement inspired many women to speak out against Harvey Weinstein. Weinstein was later convicted of rape in March of 2020. Although Burke doesn’t place any blame on the white women who caused the movement to gain popularity, she does think that the media may have overlooked her contributions. If Alyssa Milano had not given her credit, “people would not know my [Burke’s] name.” This speaks to a greater issue of the media, and even mainstream feminism disregarding black women and their contributions.

In response to Trayvon Martin’s killing by a neighborhood watch captain, Alicia Garza, Patrisse Cullors, and Opal Tometi created the Black Lives Matter Network in 2013, as stated on the Black Lives Matter Website. These “three radical black organizers”, used #BlackLivesMatter as an organizational tool, rallying support from local activists. The movement spread rapidly because of the Ferguson riots, and soon preventing police brutality became a nationwide effort. Along the way, their message was co-opted by liberal politicians who rapidly diluted the founders’ original demands. In a Politico statement, Alicia Garza stated that Black Lives Matter was used as a “political football” that “really helped push this [Biden-Harris] campaign over the finish line”, yet she had not heard anything “substantive about what kind of changes or reforms that the Biden administration was going to make”. Instead, she believes politicians have been “condescending” to activists calling for measures like defunding the police. Even after creating their own movement, black women were still ostracized and their policies were deemed too aggressive.

Feminist movements that emphasize black women and their achievements are still needed today. Black women deserve spaces where they can freely express their thoughts. Carving out movements for themselves, these feminists subsequently fight for the liberation of all women.